Happy bloggy birthday... six years on and a bit of creative reflection

I had a very spooky moment yesterday... well, a tiny bit spooky. Ok, not spooky at all but a massive coincidence! I had been thinking about blog post ideas and it popped into my head that I should look at what date it was when I started my blog, as it might be nice to look back at how much has happened since then. I looked and would you believe it, today is the anniversary of my first ever post.

My first post was made on the 14th June 2011. I was preparing for my degree show at the University of Huddersfield and was soon to go to Hallmark for two weeks, on a work placement. The work placement was a real kick start, as I was kept in as a freelancer after the placement and it set me along a path of being able to pay to live by doing something I loved, which was the first and most important goal!

I really don't encourage you to trawl through my old posts, they were random and a little cringey as I still finding my way - I was experimenting with styles and ideas that didn't always flow very well. Luckily this wasn't a problem for the greetings industry - the more styles I could do the better - and it has been fun to keep practising at this into my current position at UK Greetings. After taking a permanent position and in the meantime, completing an MA, the style of my 'own work' was still unformed, though looking back now, there were elements there that have become clear staples in my work today.


My freelance career had turned into my employed career, so when I finished my MA in October 2014, there became a vacancy in my life again for 'my own stuff'. After a year of going back and forth with a few children's book agents - trying things, making changes, waiting to hear back - nothing was happening and I was feeling a bit lost. I had added to my portfolio but still felt unsure of what style was working best. But things finally started to fall into place... when I decided to stop trying. 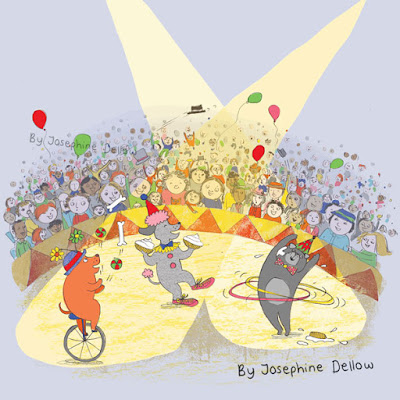 DISCLAIMER
I must say that the phrase 'I decided to stop trying' should not be taken lightly. I don't recommend that anyone does this in most senses of the term. Especially teenagers and new graduates. I definitely don't mean 'stop trying, sit back and do nothing, I'm sure it will all work out'. This was about my style and I felt like I had enough experience and commercial eye to take a chill pill and let my drawings lead the way.

I had booked to do a screen printing course in September 2015 and eventually decided to draw some shopfronts to print from. I knew I had always loved drawing houses and shops and they had always appeared in my drawings at different points. It felt pretty unrelated to my children's book portfolio, so it was a relaxed break from the pressure I'd been putting on myself to get published. I really didn't know where it might take me, but after a little reassurance from some supportive friends that people might buy my drawings for their walls, I kept on drawing. My 'stopping trying' idea was literally to just draw the things I liked to draw and take a break from trying to get published, with the loose thought that I could make prints of my drawings and see if people buy them.


This was all definitely a turning point, not just for my work, but for my own interpretation of creativity. Things fell into place as I let go of the end goals and made way for an organic process. I have built up a pretty big collection of work now - which I take to art markets and print fairs - but even with the amount of planning that takes, I am loving not knowing what it will lead to or what I might be working on this time next year.

Some exciting things that have come up so far have been having my own pop up shop/artist showcase in The Civic, Barnsley; being asked to show work in an exhibition of Yorkshire artists and makers (details to follow soon) and selling at some lovely markets like Etsy Made Local and Peddler Market in Sheffield.

I've found my own way to get my work out there, feeling long since freed of the notion that I needed to be published. I get to communicate directly with all my customers, which is a joy every time. As for my 'style', it naturally formed itself quite quickly once I relaxed and just kept drawing. I wasn't going to stress anymore - I'm doing it for fun, because I love it.

Well I think that was suitably deep and reflective for a six-year-on post. Hope it wasn't too fluffy! Thankyou very much to anyone who reads my blog. Let's call a spade a spade - there's been some silly times and some boring times. But I think it's got more interesting lately and my blog finally has a purpose. Here's to the next six! (Or four rather... 'ten years on' would be way more catchy).
Posted by Josephine at 10:34 0 comments