I've been so very busy since finishing uni, I can't believe my luck really.

June was a mad month and the madness has continued since then! There was the degree show at Uni, then I went to London the following week to attend a children's book portfolio day. The next week was D&AD New Blood in London - my work was featured on the stand for the University of Huddersfield. It was inspirational to see so much talent in one place and so it felt good to be part of that. London was extremely hot, and I had forgotten just how busy it is! Give me Leeds any day! But it was good.

Two of my illustrations are currently on show at Mr Thomas' Chophouse in Manchester, in an exhibtion called Unleashed: The Best in the North. The exhibition is on until the end of August, when it will then move to Tom's Chophouse, Leeds. It was such an achievement to get my work into this show anyway, but I was also one of the final 25 (from 190 students) to be shortlisted for the Best in the North award. 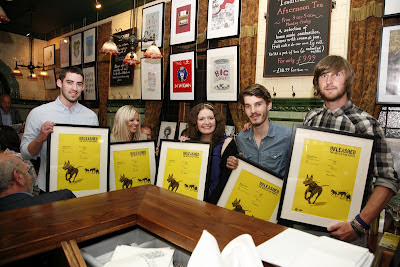 Very excitingly, some ladies from Hallmark came to visit our degree show! Our tutor had told us in advance, so that we could be there ourselves to be introduced. I really didn't know what a greetings card publisher would make of my portfolio. But hoorah!!! Hallmark did indeed get in touch and offer me a placement! I went there for a two week placement and I have now been there four weeks - they wanted me to stay to keep illustrating for them!! I am getting so much practice, drawing every day, trying new ways to colour my work, getting better with the digital side of things and getting to illustrate such varied subject matter every day! Plus, I love the idea that all my work is intended to make someone smile - that is so my cup of tea!!!
Posted by Josephine at 06:51 1 comments

I always love when in books and magazines, I find pictures of illustrator's studios! I shall take some more next time it's a bit tidier than it is now! But here is one I had to hand of my desk, when I was in the process of doing my final project, hence the messiness! Clearly I had decided to procrastinate a little by taking random photos...

I have a very considerate co-habiting boyfriend, who doesn't mind me taking up the whole attic for my work! We do have a guest bed up there too... which comes in handy for when I need to curl up and be inspired by my lovely books, or occasionally have dropped off to sleep in days of final year exhaustion! 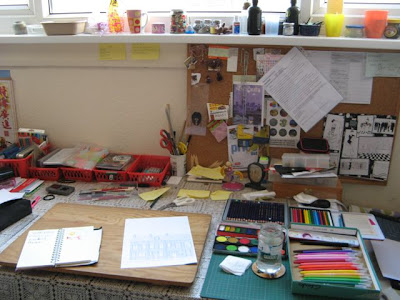 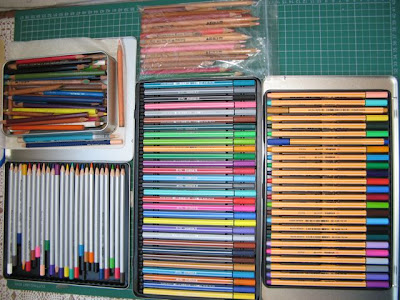 I love my special pens! I got my coloured Stabilo fineliners and felt tips from a huge supermarket in Bahrain when visiting my friend! If you ever get chance to go to Bahrain, get yourself to the shops for some art supplies! They are mega cheap over there!!
Posted by Josephine at 15:15 0 comments

Continued from below post - an overdue breakdown of my final year project work!

After Christmas was our final major project, for which I wrote my own brief. I had written my dissertation on an area of the children's book industry and really wanted to take this opportunity to create my own first picture book. I illustrated 12 double page spreads to complete a 24 page book, all about a street called Nansen Row and the perfectly ordinary, yet equally interesting, people who live there. The text told the reader about the characters, who they were, things they liked, little quirks about their personalities.

This was inspired by a life long intrigue into the lives and homes of others, and the unique quirks that make up the many characters around us. One particular inspiration that sticks in my mind is Shirley Hughes. I really can remember being very young and looking at her books and noticing how hers were different to other picture books - they had ordinary people in, with stories about their lives at home, still making realistic, every day events just as captivating as the weird and magical story lines in other picture books. 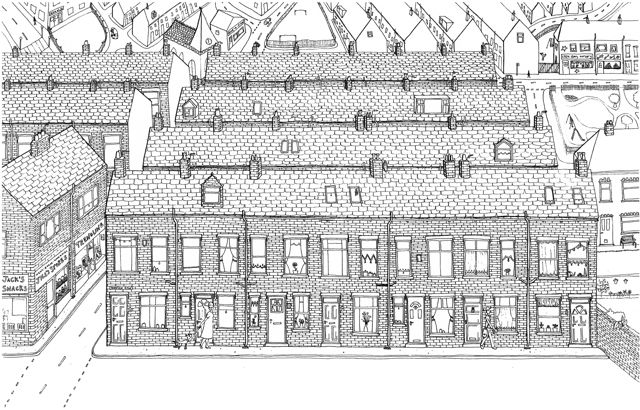 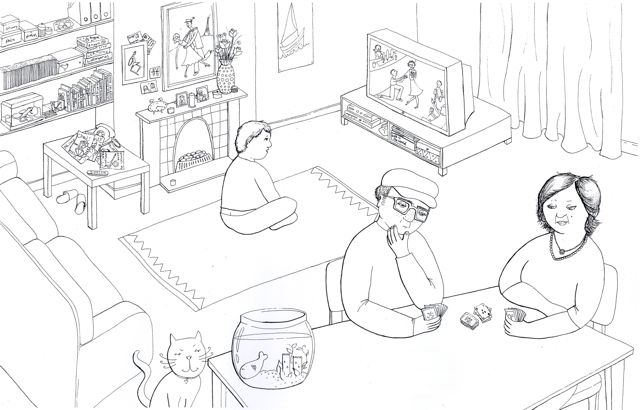 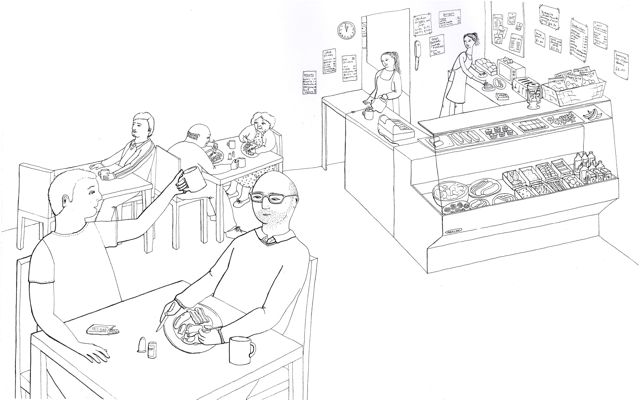 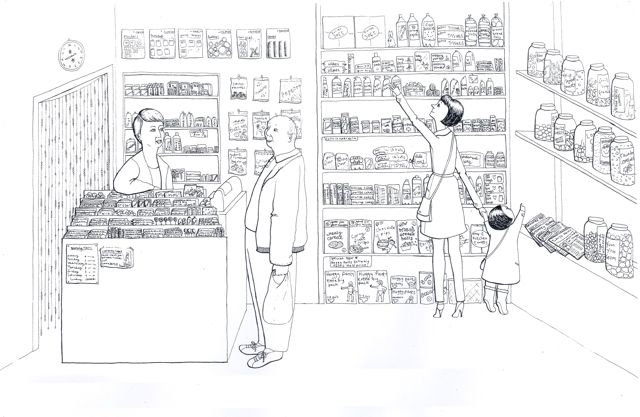 I love books where there are little things to spot and bits to read in the pictures. That is what I aimed to achieve with these pictures, as well as include small, subtle things that older children or adults might notice more and find funny.

All the ways I tried of colouring the pictures seemed to distract away from the detailed line work. In the end, I let the pictures stay in black and white, it was a gut instinct and the best thing to do, as I wanted the intricate details to remain a prominent feature. I've been told since they have a graphic novel style about them, which was a good thing to hear because I liked the idea of older children and adults looking at the book. 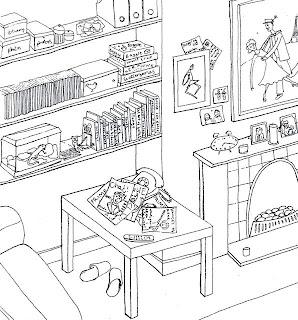 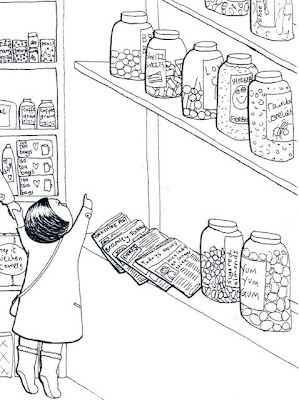 In the first term of my final year, Major project A was split into two projects. The first was a book cover project, where we had Illustrator, Daren Newman, come in to brief us. This was a book cover he was working on himself, for author Alma Katsu. The brief required certain elements to be present in the illustration - a magic potion bottle, roses with thorny branches and a heart. It was also to have a gothic, ornate appeal and so I went for a bit of first hand research to York, primarily to visit the York Minster. I got lots of ideas for little details to draw from the architecture. 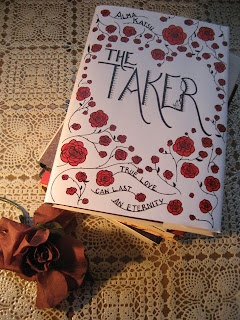 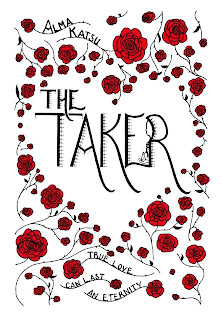 In the next brief, I was asked to come up with a way to visually communicate music to it's listeners. I chose to make a story book out of a song, using the lyrics as the text. I used the song, Dedicated Follower of Fashion by The Kinks.

The song is character based, and unlike the majority of songs, is not about that old chestnut, love! Also, because of this character in particular and his love for fashion, it gave me lots of ideas of ways to work with all my old fabrics and use lots of colour. I used to study Fashion Design (maybe I'll do a post about that some time!), so I do have a love for texture and fabric even though I will probably never sew a zip again in my life or get excited over Vogue magazine...

Here are just three of the seven final pieces I made. 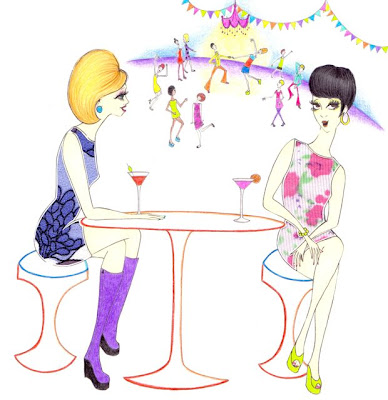 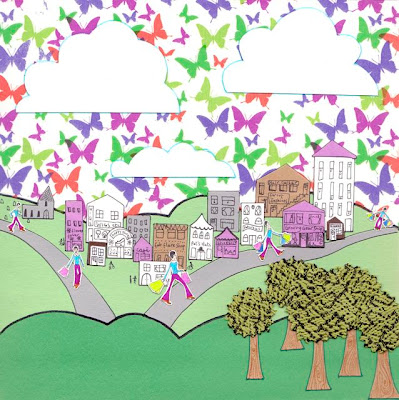 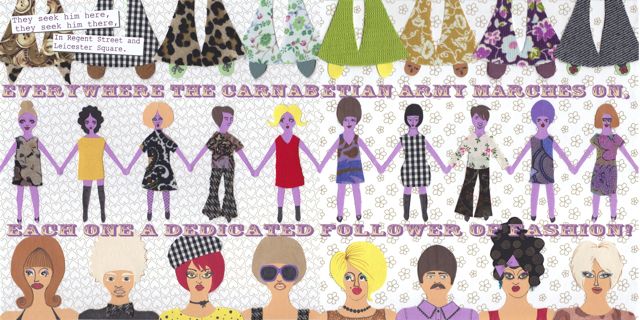 I incorporated lots of collage and very intricate cutting in some places, as shown in the following photo! For some reason, I get a bit of a weird buzz from cutting out teeny weeny things like this, which is strange because it can be quite stressful and, after a while, painful. 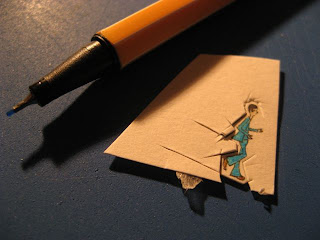 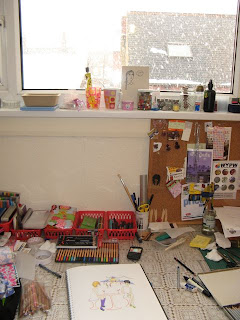 My degree show was really exciting and it was such a lovely atmosphere on the opening night! It was completed by the presence of my boyfriend and some of my best friends and family who were able to come, people who have been really supportive and interested in my work throughout my time at university. Here are some pictures with my portfolio in - we also had our own great big banner each too. 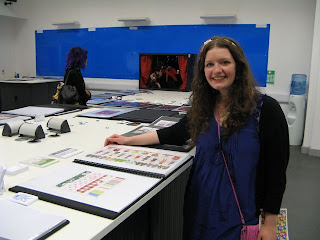 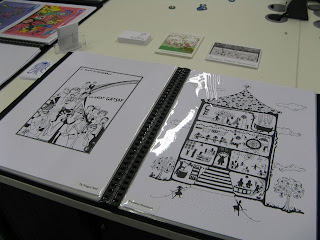 It's the preview of my degree show tomorrow! I do feel excited even though I keep getting a funny feeling that I've forgotten something... Anyway, here's a little look at my business cards and postcards which I'm probably a bit too excited about! It was harder than I thought it would be to pick a tiny area of one of my drawings for the business card. I wanted to keep it simple but hopefully something that might make people smile, so I went for Peggy - my little old lady making tea before bed. 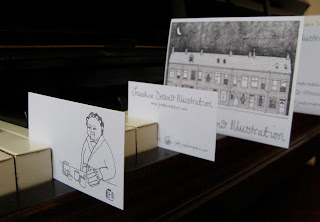 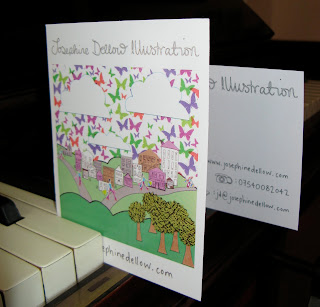 Right well here it is, my first ever blog post! I don't have anything planned for this post, but after taking my time over much pondering and contemplation, I felt the need to just get this first one written! I'll be much more comfortable writing my second or third post and look forward to that part! Plus after all the encouragement, I didn't want to keep Hannah Stevenson in any more suspense!!

The next few weeks should be very exciting I hope! My degree show starts on Friday, marking the end of my studying and the start of me going out into the big wide world to see what I can do with my degree. Over the next few weeks, I will also be showing my work in an exhibition called 'Unleashed: The Best in the North' at Mr Thomas' Chophouse, Manchester, and at D&AD New Blood in London. Exciting!

If anyone's reading this, you might like to have a little look at my new website to see what I do.
Posted by Josephine at 09:34 1 comments