Learning to use White Privilege

The last few weeks highlighted some major gaps in my knowledge and awareness of racism. Like many, this has been an awakening for me, to the fact that it’s not enough to be a non-racist and that I needed to be anti-racist, learn more and try to help make a change. I realised that I only had a fuzzy grey knowledge of what white privilege meant, and that I’d been pretty unaware of the injustice and oppression that happens in today's world.

There are ways to fit change-making into your life, even if you don’t have time or money to spare. Besides the fact that signing petitions for change take a matter of seconds, there are podcasts out there that you can listen to while you cook dinner and films on Netflix to help build your understanding. A little more background knowledge has helped to start seeing it around me and build my confidence to talk about it. 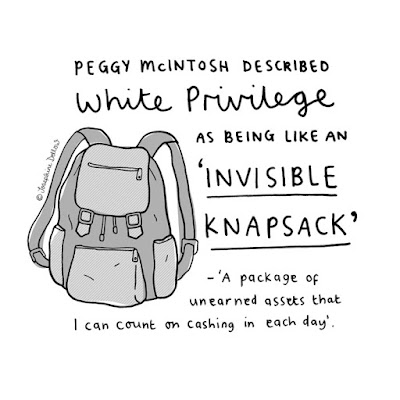 A podcast I listened to*, on the subject of white privilege, led me to reading Peggy McIntosh’s essay from Working Paper 189 (1988). The essay is titled after McIntosh’s metaphor that ‘white privilege is like an invisible, weightless knapsack’ and she describes a ‘package of unearned assets that I can count on cashing in each day’.
* The podcast was Understanding White Privilege, by the National Association of School Psychologists.

The essay is just six pages long and includes a bullet point list of benefits that people of colour do not have. If you’re not sure where to start or are not a big reader, I highly recommend reading this essay to get an overall impression of what white privilege is. Peggy also has a Ted talk, which you can watch here - Peggy McIntosh: How to recognise your white privilege - and use it to fight inequality.

I've spent a lot of time imagining being in someone else's shoes, over the last few weeks. Below are some of the images that rose to the surface for me after reading and hearing peoples stories.

More than 90 years since their invention, dark skin coloured plasters (or ‘band-aids’ if you’re international) only came on to the market in the last few years. In March 2020, Tesco became the first UK supermarket to sell their own version, but I couldn’t find them being sold by the other major UK supermarkets or chemists. After searching, it’s my assumption that a person of colour couldn’t easily pop to their nearest shop or chemist and buy plasters to match their skin. 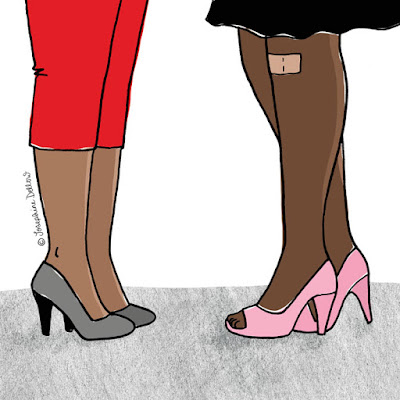 This made me think of the many times I’ve been caught without and had to go emergency plaster shopping, always on a day that I’ve needed to look smart or grown up. I foolishly trusted a new pair of shoes once on the first day of a new job and was in agony by 10am, after the tour of the building. I’ve cut my knee while shaving, when I’ve been about to go to a wedding and am attempting to look like a semi-glamorous grown up... and I've crouched in the stairwell of Boots in London to apply the plasters I’d just bought, on a day of important meetings in the wrong shoes (again) on a hot, sweaty day (they weren't even uncomfortable shoes, but my feet really don't cope well with the big smoke).

It might seem like a tiny thing, but those plasters did blend in with my skin and didn’t draw attention to my clumsiness or bad footwear choices. They were all times when I was already on display, aiming not to feel vulnerable and I didn’t need extra things to add to my social discomfort.

I’ve seen personal references on social media about parents having to explain systematic racism to their children - for example, when their child has experienced racism at school or hasn't been able to buy a doll in a toy shop that looks like them. It's one of the things on Peggy McIntosh's list of privileges - she writes that white people don’t have to educate their children ‘to be aware of systematic racism for their own daily physical protection.’ 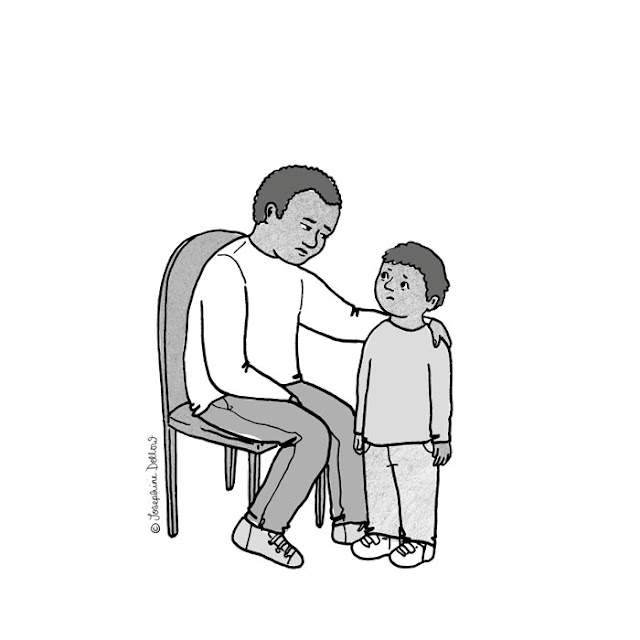 It made me so sad to imagine a child finding out that the world they live in is oppressive and unjust. Does the parent try to empower the child that they could fight for change, knowing they may never win, or choose to save them the frustration by teaching them to adapt and accept the way things are? This is a choice that white parents are very privileged not to have to worry about.

I came across Chantell Marlow who has been sharing some of her experiences on Instagram. One was about makeup for darker skin tones being locked up in theft proof cases in the supermarket. I googled it and found more examples of anti theft devices only on the darkest shades of makeup.

This is a pretty literal example of racial stereotyping. Whether it’s treating a black person more like a potential shoplifter than a white person, or a family member making a ‘harmless’ racist joke - using stereotypes ultimately reinforce the untrue message that people behave differently because of the colour of their skin. 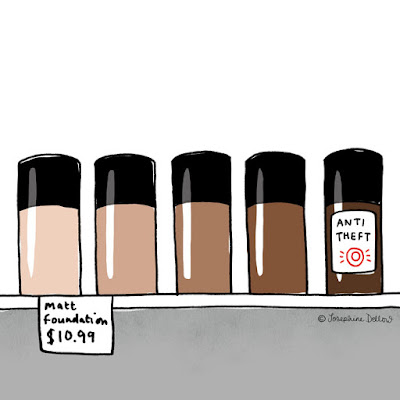 Another story I heard was from Leona Lewis on IGTV. She explained how she was confronted and asked to leave a store, while shopping in London. She was the only person of colour in the shop. Everyone else saw what was happening and showed their disagreement by leaving the shop - probably the non-racist thing to do. No one did the anti-racist thing and spoke up about the shop assistant being in the wrong. In the past, maybe I too would have felt it was enough to ‘show my disgust’ by pulling a face and taking my money elsewhere, but now I promise that I'll use my unearned privilege and speak up if I ever witness this kind of situation.

By finding out for myself what white privilege is, I’ve started to understand how I can use the privilege in being an anti-racist. If a white person has a racist view, then chances are they might take more notice of a white person calling them out. I hate how that sounds, it’s an awful truth, but until the privilege system is broken down, we can use what we have for good.