2018 Review: A look back at my first year of full time freelance 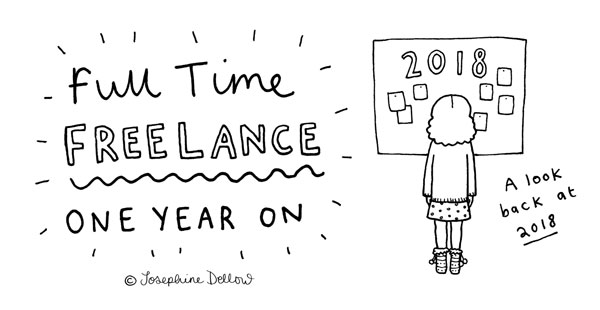 I hope you are having a lovely shiny new year so far. I had a quiet start back after new year - I was under the weather for a few weeks and then had my head down with a big deadline. So it's a little later than I planned, but I felt I should acknowledge that I've just completed my first year of running my business full time - and reflect and share some of what I've learnt.

To fill you in up to the start of 2018, I'd been illustrating and designing greetings cards for almost seven years, the last five of those years was as a permanent employee (I was freelance before that but mostly for cards still). I worked four days a week, which allowed me time to complete my MA and then, eventually, start my own business. It was hard and I'm so grateful I don't have to juggle both any more. I am much more chilled and happy, feeling like my future is in my own hands.

I'm a big believer in simply 'doing things and putting it out there'. Whether I've posted a picture to my Instagram or made a new industry contact, the little things can all lead to something else. So I like to think that every time I put something out there, I am planting seeds. Some could be magic beans and some might never sprout. So you have to plant a lot of them and spread them far and wide! Having lots of little sprouts that you need to nurture might have much more longevity than one magic beanstalk with a pot of gold at the top. 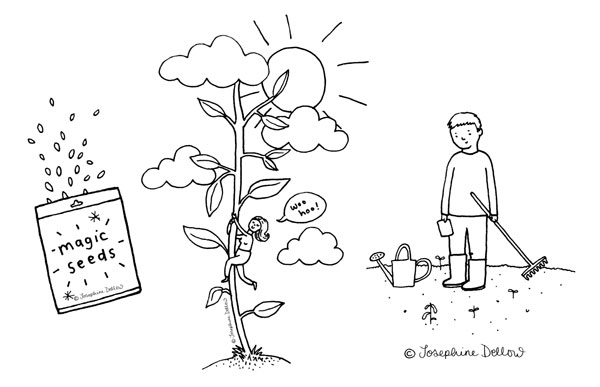 So, on to looking at my previous year. I definitely don't want to sound like I'm boasting about all my achievements but a.) it's good to look back at all the hard work you've done and where it's got you and b.) I'm not sure who actually reads my blog, so I doubt I need to worry. It's good for me to think about what went well and what I'll do differently and I hope it's interesting or helpful to others who are starting out.

Sharing my work, on Instagram especially, has lead to some lovely collaborations and features on blogs and in magazines in the last year. A job I got through using hashtags on Instagram was illustrating The Strong Girls Colouring Book for Scout - the super strong girl behind Barbells Before Boys. Scout is based in Australia and messaged me after spotting me through hashtags I was using while illustrating A Very Sheffield Colouring Book.

So my tip here is: use hashtags to get your work seen further! A long list of tags might look spammy to some people, but maybe those people work for a company where someone else takes care of the marketing. As a freelance artist, it's your job to promote your own work - and getting it seen by more eyes is way more important than looking cool (in my opinion).

This year, I worked on two more books (including a cover - yay!) for Hodder & Stoughton and Little, Brown Book Group. I had a good few meetings to show my portfolio and got lots of feedback from publishers I made contact with. One of the jobs came to me three or four months after a meeting, so it was great to see results long after I had worked to get my work noticed.

I find that sending a physical sample in the post and following up with a phone call is much more effective than sending out a PDF/link to lots of publishers and waiting to see who replies. They get LOTS of emails like that and they are very easy to delete! So you really do have to stand out.

After listening to customer requests at markets (one of the benefits of selling at markets!), I illustrated a colouring book that was all about Sheffield. A new thing for me was that I took pre-orders before it was finished, which funded the first print run! It went down really well and I've had a couple more print runs made since.


It took a while to find a reliable printers to execute it to the standard it deserved after the hours I'd lovingly put in. I recommend not putting all your eggs in one printer's basket! Get samples and test prints, allow time for things to go wrong and when they do, be a moaning minnie and get it put right. In the end, I found a really good printers, but on one print run, they did have a technical issue which resulted in 300 copies not good enough for me to sell. I donated them to Sheffield Children's Hospital at Christmas, so I hope that lots of poorly children got to enjoy my colouring book over the festive season!

My move to Sheffield from Barnsley meant that getting to West Yorkshire Print Workshop (where I made my screen prints) would take twice as long. Trying out a new place fell down the priority list and before I knew it, it had suddenly been a year since I'd made any screen prints.

I finally joined Sheffield Print Club late last year and got used to working in a different space. I made a new print of my Tower Bridge, London illustration. Maybe it was because of some of the materials were slightly different to those I'd used previously, but my fine line work wasn't coming out as well at first. I had to take some of the detail away and thicken up some bits. It made a healthy change for me to have to adapt the design as I went and it not come out as I'd originally intended. The most creative things happen when you have to relinquish control!


It was good to get back to screen printing. I don't go very often, but it's therapeutic to do something so tangible and process driven. And finding new places to work and belong make me feel extra settled and part of the wonderful creative community here, in my new home of Sheffield.

Putting a real effort into approaching new stockists is not one of my strengths and something I could do with addressing this year. So I think I did well considering, to get my pieces into a few new places!

I currently have a small selection in The Cooper Gallery, Walkley Press and Stopwatch Gallery. I was delighted to be accepted to show my work in the Millennium Gallery this Christmas, in their Handmade for Christmas shop. I am very proud to have work in these lovely shops and spaces and maybe this year I will extend the list! 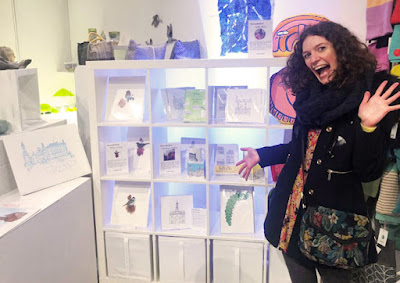 I had gotten sick of hearing myself say 'I need to draw in my sketchbook more', so last year, I decided I would draw something each day in my sketchbook. I always hear how important it is to practice and that all the amazing illustrators draw every day, but drawing every day isn't easy when you also have admin, emails and quotes that eat up your time. 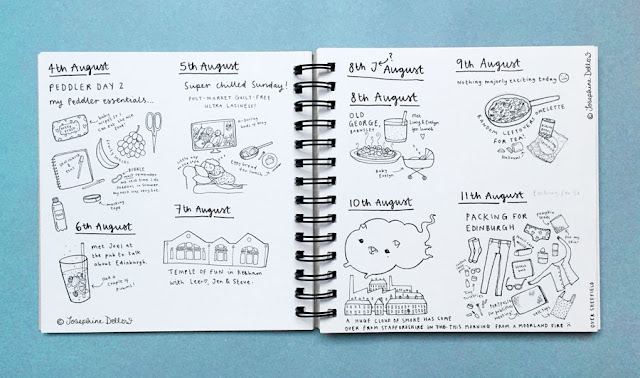 Though I didn't succeed in making it a daily thing, so much good came from what I did. Drawing 'off brief' regularly has made a huge difference to my confidence, speed and skill when I'm illustrating for clients. My personal work got referred to, by clients when briefing me, and helped influence the types of work I got asked to do.

If you're an illustrator/designer who doesn't feel like you're getting the type of briefs you want, doing personal work and getting it seen is a great way to gear the right kind of client work towards you. It may sound obvious, but getting 'pigeonholed' for the wrong kind of work can be a common frustration for commercial artists - but something you can equally use to your advantage if you turn it around and keep projecting what you want.

As well as keeping up off brief work, I have set out to have another go at my sketchbook diary this year. I hope to make it easier to achieve by doing the following:

The fact that I mostly have no idea is one of my favourite things about my job. I really enjoy that the year ahead is totally flexible and could go in different directions, depending mostly on what I do, with a sprinkle of chance.

Some things I can already predict for 2019 is that I'm showing my work at London Book Fair in March, in their Illustrator's Gallery - which is really exciting! It's my first time and I'm looking forward to meeting lots of publishers there. I have also made a big, bold move and booked my very own pop up shop for a whole week - more info to come later in the year! I am also going to blog more. I've said it before and it's never been my forte, but I have to blog more! So I'm saying it here and I will try my best.

Other than that, just lots more drawing, sharing what I do and seeing what grows!